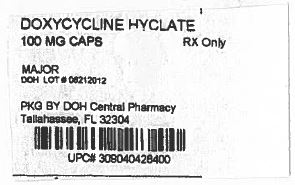 There are high number of clear evidence that breastfeeding provides best nutrition that you can give to your baby. It is also evident that lactation is good for mothers health as well. Evolution has designed breastfeeding in a way that it caters all nutritional need of your child. However modern medicine is quite new for evolution, that is why mothers body is not well prepared to filter unnecessary chemical found in medicines. It becomes a necessity to figure out which drug is safe and which drug is dangerous for your newborn while nursing. In this article we will understand function of Doxycycline Hyclate 100 Mg and its suitability with breastfeeding.

What is Doxycycline Hyclate 100 Mg used for?

I am breastfeeding mother and I am using Doxycycline Hyclate 100 Mg. Can it have any bad effect on my kid? Shall I search for better alternative?

Doxycycline anhydrous is the one and only active ingredient present in Doxycycline Hyclate 100 Mg. Doxycycline anhydrous in itself is a low risk drug for lactation so it is easy to understand that Doxycycline Hyclate 100 Mg also comes in category of Low Risk item while breastfeeding. Below is the summary of Doxycycline anhydrous in breastfeeding.
Statement of Manufacturer/Labeler about breastfeeding usage
Nursing Mothers Tetracyclines are excreted in human milk; however, the extent of absorption of tetracyclines, including doxycycline, by the breastfed infant is not known. Short-term use by lactating women is not necessarily contraindicated; however, the effects of prolonged exposure to doxycycline in breast milk are unknownd. Because of the potential for serious adverse reactions in nursing infants from doxycycline, a decision should be made whether to discontinue nursing or to discontinue the drug, taking into account the importance of the drug to the mother. (See WARNINGS.)

Excreted into breast milk in quantities that would be clinically significant, however, intestinal absorption by infant's gut is hampered because of formation of chelating products by union with the milk's calcium. Tetracycline is at lesser amount excreted into breast milk and at higher proportion bound to calcium, hence, it is fewer absorbed than Doxycycline. Thus, it is a optimal alternative while breastfeeding. Long-term treatments are not recommended (over 3-4 weeks) since it may cause damage of the growth cartilage, teeth discoloration and imbalance of intestinal flora. Be aware of false negative results that may be obtained from infants with bacterial cultures when the mother is on antibiotics.

A number of reviews have stated that tetracyclines are contraindicated during breastfeeding because of possible staining of infants' dental enamel or bone deposition of tetracyclines. However, a close examination of available literature indicates that there is not likely to be harm in short-term use of doxycycline during lactation because milk levels are low and absorption by the infant is inhibited by the calcium in breastmilk. Short-term use of doxycycline is acceptable in nursing mothers. As a theoretical precaution, avoid prolonged or repeat courses during nursing. Monitor the infant for rash and for possible effects on the gastrointestinal flora, such as diarrhea or candidiasis (thrush, diaper rash).

What should I do if I am breastfeeding mother and I am already exposed to Doxycycline Hyclate 100 Mg?

I am nursing mother and my doctor has suggested me to use Doxycycline Hyclate 100 Mg, is it safe?

If I am using Doxycycline Hyclate 100 Mg, will my baby need extra monitoring?

Who can I talk to if I have questions about usage of Doxycycline Hyclate 100 Mg in breastfeeding?