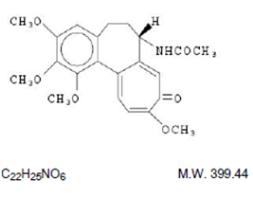 Nutrients from the food that you eat passes to your breast milk. Its good idea to take healthy diet while breastfeeding. You may need to consume more calories per day to support healthy body system. Some time it gets necessary take medicine while you are breastfeeding and as other food items passes into breast milk, medicine passes as well hence it becomes obvious to understand its effects while breastfeeding. We have analyzed many medications and in this sheet we will present some fact and known information associated with Colchicine 0.6 Mg while breast-feeding.

What is Colchicine 0.6 Mg used for?

Is Colchicine 0.6 Mg usage safe while breastfeeding? If a lactating mother is using it can there be any effect on growth or development of infant?

Colchicine 0.6 Mg contains only one active ingredient that is Colchicine. We have analyzed the usage of Colchicine in breastfeeding and our analysis suggest that Colchicine poses Low risk for infant while breastfeeding and hence Colchicine 0.6 Mg itself shall be considered Low risk item for breastfeeding.
Statement of Manufacturer/Labeler about breastfeeding usage
8.3 Use in Nursing Mothers Colchicine is excreted into human milk. Limited information suggests that exclusively breastfed infants receive less than 10 percent of the maternal weight-adjusted dose. While there are no published reports of adverse effects in breast-feeding infants of mothers taking colchicine, colchicine can affect gastrointestinal cell renewal and permeability. Caution should be exercised and breastfeeding infants should be observed for adverse effects when colchicine is administered to a nursing woman.

It is used for treatment of Gout, Familial Mediterranean Fever. As well as for other conditions like Amyloidosis, Behçet's Syndrome, Pericarditis, Primary Biliary Cirrhosis and Pyoderma gangrenosum. It is excreted in breast milk in quantities that differ according to different published studies, from no clinically significant in some, until being important in others, but there have been no problems in infants whose mothers were treated, even after months, with undetectable plasma levels in these infants. The concomitant use of macrolide antibiotics and fruit juices (both the mother and the infant) , especially grape-fruit, is not recommended since they may interfere with bile excretion and greatly increase toxicity. The American Academy of Breastfeeding rates it as compatible with breastfeeding. List of Essential Medicines of WHO (2002): compatible with breastfeeding

Long-term prophylactic maternal doses of colchicine up to 1.5 mg daily produce levels in milk that result in the infant receiving less than 10% of the maternal weight-adjusted dosage. The highest milk levels occur 2 to 4 hours after a dose, so avoiding breastfeeding during this time can minimize the infant dose, although some clinicians simply recommend taking the drug after nursing. No adverse effects in breastfed infants have been reported in case series and a case-control study and some authors consider colchicine safe during breastfeeding in women being treated for familial Mediterranean fever or rheumatic conditions.[1][2][3][4]

I am nursing mother and I have already used Colchicine 0.6 Mg, what should I do?

Colchicine 0.6 Mg is in the category of low risk, if you have already used it then its not a big deal if health and behavior of baby is good. However your health care provider shall be aware of the fact that you have used Colchicine 0.6 Mg so you should inform him based on your convenience.

I am nursing mother and my doctor has suggested me to use Colchicine 0.6 Mg, is it safe?

Colchicine 0.6 Mg comes in category of low risk and if your doctor is aware that you are breastfeeding it should be ok to use

If I am using Colchicine 0.6 Mg, will my baby need extra monitoring?

Not much monitoring required while using Colchicine 0.6 Mg

Who can I talk to if I have questions about usage of Colchicine 0.6 Mg in breastfeeding?