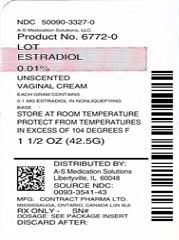 It is recommended to breastfeed exclusively for six months and then while introducing to other food sources extend it to twelve months. In this duration most mothers will need help of some sort of medication, It could be for short term like could and flue or it could be something chronic like Arthritis or Diabetes and here comes the question of safety of medication in use. In this post we will figure out what is Estradiol Cream and whether its safe to use Estradiol Cream while nursing or not.

What is Estradiol Cream used for?

Estradiol vaginal cream, USP, 0.01% is indicated in the treatment of moderate to severe symptoms of vulvar and vaginal atrophy due to menopause.

Is Estradiol Cream usage safe while breastfeeding? If a lactating mother is using it can there be any effect on growth or development of infant?

What if I already have used Estradiol Cream?

I am nursing mother and my doctor has suggested me to use Estradiol Cream, is it safe?

If I am using Estradiol Cream, will my baby need extra monitoring?

Who can I talk to if I have questions about usage of Estradiol Cream in breastfeeding?