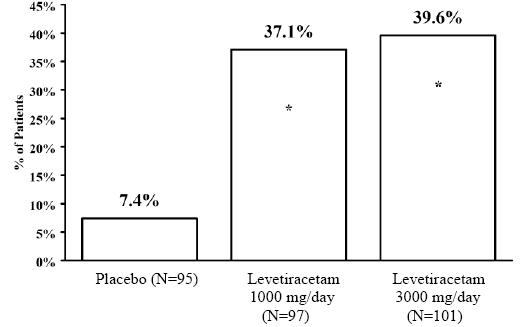 Levetiracetam is indicated as adjunctive therapy in the treatment of partial onset seizures in adults and children 4 years of age and older with epilepsy.

Piracetam analog with nootropic and anti-epileptic effect. Authorized for use in children in Europe. Excreted into breast milk but infant serum levels were shown to be low. No other side effect than one case of hypotonia in a 7 days old premature whose mother was also on anti-epileptic medication. Seizures along with neonatal abstinence syndrome in a botlle fed neonate whose mother had taken Levetiracetam and Phenobarbital in pregnancy ocurred. Symptoms disappeared after initiation of breastfeeding.

Maternal doses of levetiracetam up to 3500 mg daily produce low levels in milk and would not be expected to cause any adverse effects in breastfed infants, especially if the infant is older than 2 months. If levetiracetam is required by the mother, it is not a reason to discontinue breastfeeding. However, the infant should be monitored for drowsiness, adequate weight gain, and developmental milestones, especially in younger, exclusively breastfed infants and when using combinations of anticonvulsants. Maternal serum level monitoring and dosage adjustment is advisable in the early postpartum period if the drug was taken throughout pregnancy and breastfeeding.[1] Some evidence suggests that levetiracetam might reduce the maternal breastmilk supply in some women.