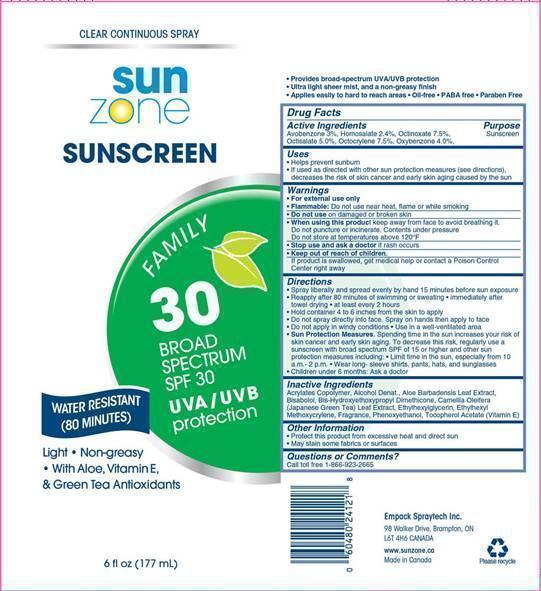 Modern medicine has evolved so much so that sooner or later every breastfeeding mother needs to take it in one form or other. Medication that is present in mothers blood will transfer into her breast milk to some extent. Most drugs do so at low levels and pose no real risk to infants but then there are some exceptions. In This post will discuss whether Sunzone Family Sunscreen Spf 30 Broad Spectrum is safe in breast-feeding or not.

What is Sunzone Family Sunscreen Spf 30 Broad Spectrum used for?

Spray liberally and spread evenly by hand 15 minutes before sun exposure Reapply after 80 minutes of swimming or sweating immediately after towel drying at least every 2 hours Hold container 4 to 6 inches from the skin to apply Do not spray directly into face. Spray on hand then apply to face Do not apply in windy conditions Use in a well-ventilated area Sun protection measures. Spending time in the sun increase the risk of skin cancer and early skin again. To decrease this risk, regularly use a sunscreen with broad spectrum SPF of 15 or higher and other sun protection measures including Limit time in the sun, especially from 10 a.m - 2 p.m. Wear long-sleeve shirts, pants, hats, and sunglasses. Children under 6 months: Ask a doctor

I am currently breastfeeding and I want to know if using Sunzone Family Sunscreen Spf 30 Broad Spectrum is safe for my kid? Does it have any effect on milk production?

Moreover, a study of offspring of dams treated with OMC (500ľ1000 mg/kg/day) showed sex-dependent behavioral changes, namely decreased motor activity in females, but not in males, and improved spatial learning in males, suggesting that OMC can affect neuronal development, however the doses used in these experiments were extremely high, not relevant to possible human exposure.

Octisalate rarely causes allergies in tropical usage. Not much study has been done on effects of topical usage of Octisalate during breast feeding however it is known to penetrate the skin hence itĺs better to use other alternatives.

I am nursing mother and I have already used Sunzone Family Sunscreen Spf 30 Broad Spectrum, what should I do?

My health care provider has asked me to use Sunzone Family Sunscreen Spf 30 Broad Spectrum, what to do?

Please double check with your doctor if he is aware of your breastfeeding stratus, Ask your doctor if there is any safe alternative of Sunzone Family Sunscreen Spf 30 Broad Spectrum. Check with your doctor if you shall temporally stop breastfeeding. You may go for second opinion as well. Still after all of this if your doctor still recommends Sunzone Family Sunscreen Spf 30 Broad Spectrum then go for it as they have access on more detailed medical and scientific information and they understand your individual medical situation much better.

If I am using Sunzone Family Sunscreen Spf 30 Broad Spectrum, will my baby need extra monitoring?

Who can I talk to if I have questions about usage of Sunzone Family Sunscreen Spf 30 Broad Spectrum in breastfeeding?