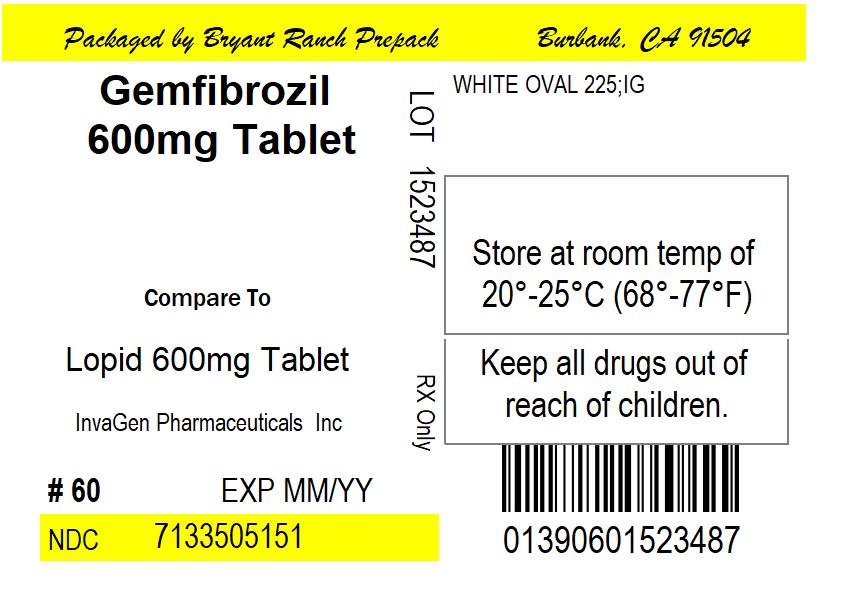 Modern medicine has evolved so much so that sooner or later every breastfeeding mother needs to take it in one form or other. Medication that is present in mothers blood will transfer into her breast milk to some extent. Most drugs do so at low levels and pose no real risk to infants but then there are some exceptions. In This post will discuss whether Gemfibrozil 180 In 1 Bottle is safe in breast-feeding or not.

What is Gemfibrozil 180 In 1 Bottle used for?

Gemfibrozil Tablets, USP are indicated as adjunctive therapy to diet for: 1. Treatment of adult patients with very high elevations of serum triglyceride levels (Types IV and V hyperlipidemia) who present a risk of pancreatitis and who do not respond adequately to a determined dietary effort to control them. Patients who present such risk typically have serum triglycerides over 2,000 mg/dL and have elevations of VLDL-cholesterol as well as fasting chylomicrons (Type V hyperlipidemia). Subjects who consistently have total serum or plasma triglycerides below 1,000 mg/dL are unlikely to present a risk of pancreatitis. Gemfibrozil therapy may be considered for those subjects with triglyceride elevations between 1,000 and 2,000 mg/dL who have a history of pancreatitis or of recurrent abdominal pain typical of pancreatitis. It is recognized that some Type IV patients with triglycerides under 1,000 mg/dL may, through dietary or alcoholic indiscretion, convert to a Type V pattern with massive triglyceride elevations accompanying fasting chylomicronemia, but the influence of gemfibrozil therapy on the risk of pancreatitis in such situations has not been adequately studied. Drug therapy is not indicated for patients with Type I hyperlipoproteinemia, who have elevations of chylomicrons and plasma triglycerides, but who have normal levels of very low density lipoprotein (VLDL). Inspection of plasma refrigerated for 14 hours is helpful in distinguishing Types I, IV, and V hyperlipoproteinemia. 2. Reducing the risk of developing coronary heart disease only in Type IIb patients without history of or symptoms of existing coronary heart disease who have had an inadequate response to weight loss, dietary therapy, exercise, and other pharmacologic agents (such as bile acid sequestrants and nicotinic acid, known to reduce LDL- and raise HDL-cholesterol) and who have the following triad of lipid abnormalities: low HDL-cholesterol levels in addition to elevated LDL-cholesterol and elevated triglycerides (see WARNINGS, PRECAUTIONS, and CLINICAL PHARMACOLOGY ). The National Cholesterol Education Program has defined a serum HDL-cholesterol value that is consistently below 35 mg/dL as constituting an independent risk factor for coronary heart disease. Patients with significantly elevated triglycerides should be closely observed when treated with gemfibrozil. In some patients with high triglyceride levels, treatment with gemfibrozil is associated with a significant increase in LDL-cholesterol. BECAUSE OF POTENTIAL TOXICITY SUCH AS MALIGNANCY, GALLBLADDER DISEASE, ABDOMINAL PAIN LEADING TO APPENDECTOMY AND OTHER ABDOMINAL SURGERIES, AN INCREASED INCIDENCE IN NON-CORONARY MORTALITY, AND THE 44% RELATIVE INCREASE DURING THE TRIAL PERIOD IN AGE-ADJUSTED ALL-CAUSE MORTALITY SEEN WITH THE CHEMICALLY AND PHARMACOLOGICALLY RELATED DRUG, CLOFIBRATE, THE POTENTIAL BENEFIT OF GEMFIBROZIL IN TREATING TYPE IIA PATIENTS WITH ELEVATIONS OF LDL-CHOLESTEROL ONLY IS NOT LIKELY TO OUTWEIGH THE RISKS. GEMFIBROZIL IS ALSO NOT INDICATED FOR THE TREATMENT OF PATIENTS WITH LOW HDL-CHOLESTEROL AS THEIR ONLY LIPID ABNORMALITY. In a subgroup analysis of patients in the Helsinki Heart Study with above-median HDL-cholesterol values at baseline (greater than 46.4 mg/dL), the incidence of serious coronary events was similar for gemfibrozil and placebo subgroups (see Table I). The initial treatment for dyslipidemia is dietary therapy specific for the type of lipoprotein abnormality. Excess body weight and excess alcohol intake may be important factors in hypertriglyceridemia and should be managed prior to any drug therapy. Physical exercise can be an important ancillary measure, and has been associated with rises in HDL-cholesterol. Diseases contributory to hyperlipidemia such as hypothyroidism or diabetes mellitus should be looked for and adequately treated. Estrogen therapy is sometimes associated with massive rises in plasma triglycerides, especially in subjects with familial hypertriglyceridemia. In such cases, discontinuation of estrogen therapy may obviate the need for specific drug therapy of hypertriglyceridemia. The use of drugs should be considered only when reasonable attempts have been made to obtain satisfactory results with nondrug methods. If the decision is made to use drugs, the patient should be instructed that this does not reduce the importance of adhering to diet.

I am breastfeeding mother and I am using Gemfibrozil 180 In 1 Bottle. Can it have any bad effect on my kid? Shall I search for better alternative?

Gemfibrozil, like other fibrates, decreases elevated blood lipids (triglycerides and cholesterol) by increasing the activity of lipases that catabolize triglyceride-rich lipoproteins and slightly decreasing cholesterol biosynthesis (AEMPS 2017, Ascent 2011, Miller 1998). In general, fibrates have a discrete effect on the increase of high density lipoprotein (HDL) concentration and the reduction of low density lipoprotein (LDL). Since the last update we have not found published data in relation to breastfeeding. Its high binding to plasma proteins makes it unlikely it will pass into breast milk. Cholesterol levels in milk are very stable even in hypercholesterolemic women and are not severely affected by diet or nutritional status of the mother, suggesting that 3 is synthesized, at least in part, in the mammary gland (Lawrence 2016, p 289-90).It is not probable therefore, but it is not known if the fibrates are able to alter the lipid composition of the milk. Infants need to ingest large amounts of cholesterol, as it is critical to the proper development of the nervous system, cell membranes and is a precursor of several hormones and vitamins. Until there is more data in relation to breastfeeding, it is prudent to avoid using it, at least while breastfeeding exclusively. Suspending the pharmacological treatment of hyperlipidemia during breastfeeding is not likely to alter the long-term outcome of the disease, especially when breastfeeding can be considered therapeutic (Lawrence 2016, p.393). It is advisable to follow a lipid-lowering diet. In case of administering a fibrate during breastfeeding it is advisable to choose those with a shorter half-life: bezafibrate, gemfibrozil.

I am nursing mother and I have already used Gemfibrozil 180 In 1 Bottle, what should I do?

I am nursing mother and my doctor has suggested me to use Gemfibrozil 180 In 1 Bottle, is it safe?

If I am using Gemfibrozil 180 In 1 Bottle, will my baby need extra monitoring?

Not much monitoring required while using Gemfibrozil 180 In 1 Bottle

Who can I talk to if I have questions about usage of Gemfibrozil 180 In 1 Bottle in breastfeeding?