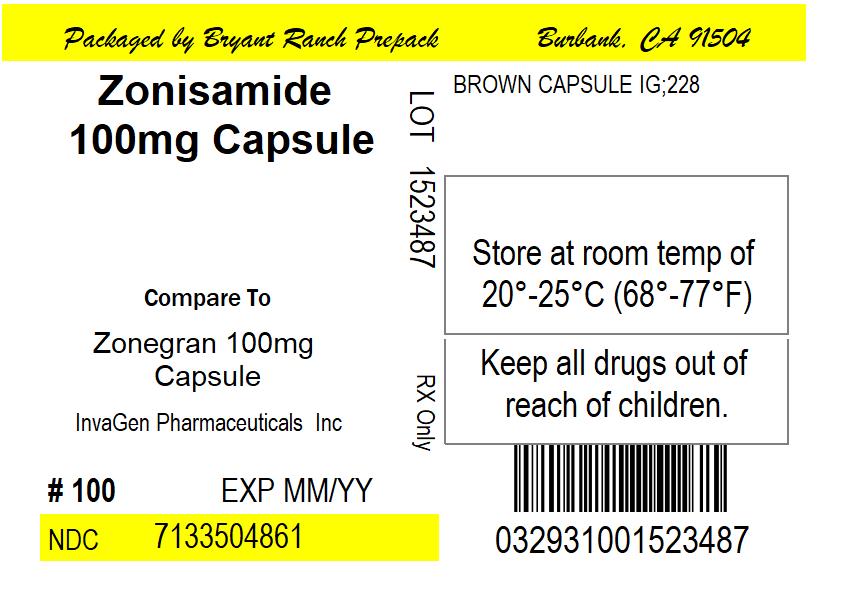 It is a well known fact that breastfeeding is best source of nutrition for infants. Breast milk provides minerals, vitamins and antibodies in most acceptable format when they need it. Nutrition taken by mother passes to breast-milk and same thing applies to medicines taken by mothers. Not all drugs cause problem for baby but some do. Lets analyze if Zonisamide | Bryant Ranch Prepack is safe for baby while breastfed.

What is Zonisamide | Bryant Ranch Prepack used for?

Zonisamide capsules USP are indicated as adjunctive therapy in the treatment of partial seizures in adults with epilepsy.

Zonisamide | Bryant Ranch Prepack while breastfeeding safe or not? Can there be any side effects for infant while using it during breastfeeding?

Zonisamide is excreted in breast milk in amounts that could be clinically significant, since the infant receives a relative dose well above 10% (Pack 2006, Crawford 2005, Tomson 2005, Shimoyama 1999, Kimura 1998). In spite of this high excretion in breast milk, infants who were breastfed by mothers taking zonisamide had no clinical problems (Shimoyama 1999) and their plasma zonisamide levels were only 15 to 17% of those measured in the mother (Kawada 2002, abstracts-P55 2011). Due to poor pharmacokinetics for breastfeeding with low protein binding and slow drug elimination (Jacob 2016) and the limited existing literature in relation to breastfeeding (Reimers 2014), it may be advisable to choose antiepileptics whose safety is better known (Hutchinson 2013, Davanzo 2013). If it is administered during breastfeeding, use the minimum effective dose (Reimers 2014) and monitor the infant's appetite, weight curve, psychomotor development, irritability, diarrhea, dehydration or acidosis, and it may be desirable to measure monthly plasma levels in the infant (Davanzo 2013, Pennell 2003). Some authors propose partial breastfeeding to decrease the dose that the infant receives through breast milk (Ando 2014).

Limited information indicates that maternal doses of zonisamide up to 400 mg daily produce high levels in milk and infant serum, but serum levels in neonates decrease during the first month of life while nursing. Although no adverse reactions have been reported in breastfed infants, the number of infants reported have been small. Alternative drugs are preferred, but if it must be given, monitor the infant for drowsiness, adequate weight gain, and developmental milestones, especially in younger or exclusively breastfed infants and when using combinations of anticonvulsant drugs. Some clinicians recommend that mothers taking zonisamide only partially breastfeed in order to reduce the exposure of the infant to the drug and to consider monitoring infants' serum zonisamide concentrations.[1]

What should I do if already breastfed my kid after using Zonisamide | Bryant Ranch Prepack?

I am nursing mother and my doctor has suggested me to use Zonisamide | Bryant Ranch Prepack, is it safe?

If I am using Zonisamide | Bryant Ranch Prepack, will my baby need extra monitoring?

Who can I talk to if I have questions about usage of Zonisamide | Bryant Ranch Prepack in breastfeeding?