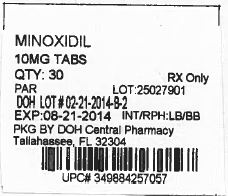 What is Minoxidil Tablet used for?

Because of the potential for serious adverse effects, minoxidil tablets are indicated only in the treatment of hypertension that is symptomatic or associated with target organ damage and is not manageable with maximum therapeutic doses of diuretic plus two other antihypertensive drugs. At the present time use in milder degrees of hypertension is not recommended because the benefit-risk relationship in such patients has not been defined. Minoxidil reduced supine diastolic blood pressure by 20 mmHg or to 90 mmHg or less in approximately 75% of patients, most of whom had hypertension that could not be controlled by other drugs.

Is Minoxidil Tablet usage safe while breastfeeding? If a lactating mother is using it can there be any effect on growth or development of infant?

Minoxidil is the only one ingredient used in manufacturing of Minoxidil Tablet, Which makes it easier to analyze its effect in breastfeeding. As per our analysis of Minoxidil it is safe to use Minoxidil Tablet while lactating. We suggest you to check further details below about Minoxidil usage in breastfeeding.
Statement of Manufacturer/Labeler about breastfeeding usage
Nursing Mothers There has been one report of minoxidil excretion in the breast milk of a woman treated with 5 mg oral minoxidil twice daily for hypertension. Because of the potential for adverse effects in nursing infants from minoxidil absorption, minoxidil should not be administered to a nursing woman.

It is excreted into breast milk in non-significant amount without side-effects observed among infants whose mothers were taking this medication. This small risk can further be minimized by avoiding to nurse one hour after taking the medication, a time at which milk level is higher (4, 10, 20 and 40 times higher than if occurs within 3, 6, 9 and 12 hours respectively) The American Academy of Pediatrics states that it is usually compatible with breastfeeding. Because, few published experience is available, it would be preferred better known options, especially within the neonatal period or in case of prematurity.

Because of the minimal amount of information on this potent agent, use minoxidil with caution, particularly when therapy involves a large maternal dosage or breastfeeding a newborn. Topical minoxidil should pose low risk to the breastfed infant.

What should I do if I am breastfeeding mother and I am already exposed to Minoxidil Tablet?

I am nursing mother and my doctor has suggested me to use Minoxidil Tablet, is it safe?

Definitely, Minoxidil Tablet is safe in lactation for baby. No wonder your doctor has recommended it.

If I am using Minoxidil Tablet, will my baby need extra monitoring?

Who can I talk to if I have questions about usage of Minoxidil Tablet in breastfeeding?