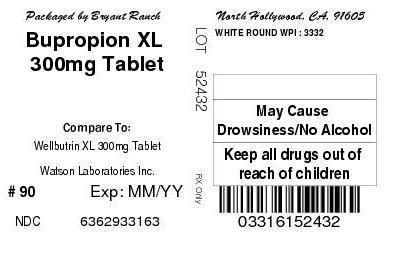 What is Bupropion Hydrochloride Xl | Bryant Ranch Prepack used for?

Major Depressive Disorder: Bupropion hydrochloride extended-release tablets (XL) are indicated for the treatment of major depressive disorder. The efficacy of bupropion in the treatment of a major depressive episode was established in two 4-week controlled trials of inpatients and in one 6-week controlled trial of outpatients whose diagnoses corresponded most closely to the Major Depression category of the APA Diagnostic and Statistical Manual (DSM) (see CLINICAL TRIALS). A major depressive episode (DSM-IV) implies the presence of 1) depressed mood or 2) loss of interest or pleasure; in addition, at least 5 of the following symptoms have been present during the same 2-week period and represent a change from previous functioning: depressed mood, markedly diminished interest or pleasure in usual activities, significant change in weight and/or appetite, insomnia or hypersomnia, psychomotor agitation or retardation, increased fatigue, feelings of guilt or worthlessness, slowed thinking or impaired concentration, a suicide attempt, or suicidal ideation. The efficacy of bupropion in maintaining an antidepressant response for up to 44 weeks following 8 weeks of acute treatment was demonstrated in a placebo-controlled trial with the sustained-release formulation of bupropion (see CLINICAL TRIALS). Nevertheless, the physician who elects to use bupropion hydrochloride extended-release tablets (XL) for extended periods should periodically reevaluate the long-term usefulness of the drug for the individual patient. Seasonal Affective Disorder: Bupropion hydrochloride extended-release tablets (XL) are indicated for the prevention of seasonal major depressive episodes in patients with a diagnosis of seasonal affective disorder. The efficacy of bupropion hydrochloride extended-release tablets (XL) for the prevention of seasonal major depressive episodes was established in 3 controlled trials of adult outpatients with a history of major depressive disorder with an autumn-winter seasonal pattern as defined by Diagnostic and Statistical Manual of Mental Disorders, 4th edition (DSM-IV) criteria (see CLINICAL TRIALS). Seasonal affective disorder is characterized by recurrent major depressive episodes, most commonly occurring during the autumn and/or winter months. Episodes may last up to 6 months in duration, typically beginning in the autumn and remitting in the springtime. Although patients with seasonal affective disorder may have depressive episodes during other times of the year, the diagnosis of seasonal affective disorder requires that the number of seasonal episodes substantially outnumber the number of non-seasonal episodes during the individual's lifetime.

Is using Bupropion Hydrochloride Xl | Bryant Ranch Prepack unsafe in breastfeeding? Can there be bad consequences for baby if I use it while breastfeeding?

What if I already have used Bupropion Hydrochloride Xl | Bryant Ranch Prepack?

Bupropion Hydrochloride Xl | Bryant Ranch Prepack is in the category of low risk, if you have already used it then its not a big deal if health and behavior of baby is good. However your health care provider shall be aware of the fact that you have used Bupropion Hydrochloride Xl | Bryant Ranch Prepack so you should inform him based on your convenience.

My health care provider has asked me to use Bupropion Hydrochloride Xl | Bryant Ranch Prepack, what to do?

If I am using Bupropion Hydrochloride Xl | Bryant Ranch Prepack, will my baby need extra monitoring?

Who can I talk to if I have questions about usage of Bupropion Hydrochloride Xl | Bryant Ranch Prepack in breastfeeding?