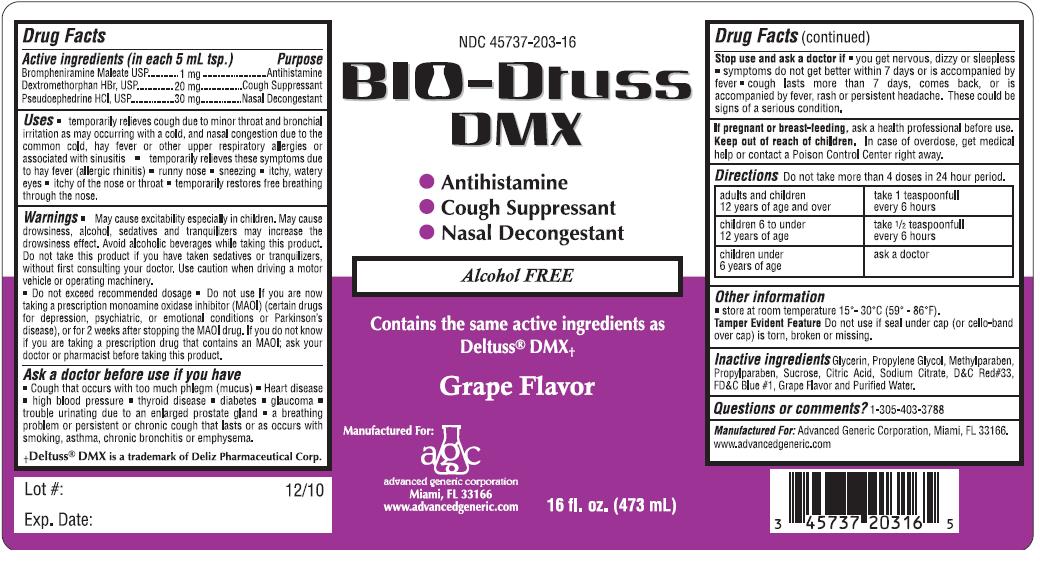 Other Information: store at room temperature 15-30 degrees celcius (59-86 degrees farenheit) Tamper Evident Feature Do not use if seal under cap(or cello band over cap) is torn, broken or missing

Purpose: Uses: Temporarily relieves cough due to minor throat and bronchial irritation as may occurring with a cold, and nasal congestion due to the common cold, hay fever or other upper respiratory allergies or associated with sinusitis Temporarily relieves these symptoms due to hay fever(allergies rhinitis) Runny nose Sneezing Itchy, watery eyes Itchy of the nose or throat Temporarily restores free breathing through the nose

Can I use Bio Dtuss Dmx | Brompheniramine Maleate, Dextromethorphan, Pseudoephedrine Liquid while breastfeeding?

First generation antihistamine, alkylamine drug, sedative with antimuscarinic effect. Described irritability, crying and insomnia in a baby from a nursing mother after taking a preparation compounded by Iso-ephedrine and brompheniramine that were possibly responsible for the symptoms.Check up the occurrence of drowsiness and inappropriate feeding of the infant. Likely inhibition of breastfeeding in the first weeks after birth due to anti-prolactin effect. It is not recommended bed-sharing with the baby if you are on this medication.

Small, occasional doses of brompheniramine would not be expected to cause any adverse effects in breastfed infants. Larger doses or more prolonged use may cause effects in the infant or decrease the milk supply, particularly in combination with a sympathomimetic such as pseudoephedrine or before lactation is well established. Single bedtime doses after the last feeding of the day may be adequate for many women and will minimize any effects of the drug. The nonsedating antihistamines are preferred alternatives.

What should I do if I am breastfeeding mother and I am already exposed to Bio Dtuss Dmx | Brompheniramine Maleate, Dextromethorphan, Pseudoephedrine Liquid?

My doctor has prescribed me Bio Dtuss Dmx | Brompheniramine Maleate, Dextromethorphan, Pseudoephedrine Liquid, what should I do?

Though Bio Dtuss Dmx | Brompheniramine Maleate, Dextromethorphan, Pseudoephedrine Liquid dose not comes in category of safe drugs rather it comes in category of low risk but if your doctor is aware that you are breastfeeding your baby and has still recommended it then its advantages must be outweighing the risks.

Who can I talk to if I have questions about usage of Bio Dtuss Dmx | Brompheniramine Maleate, Dextromethorphan, Pseudoephedrine Liquid in breastfeeding?