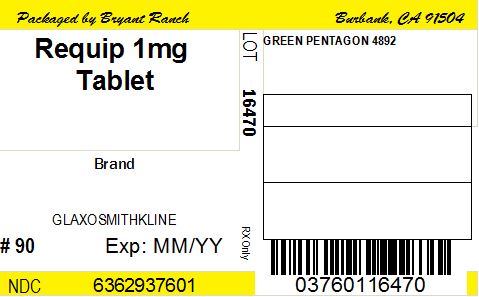 There are high number of clear evidence that breastfeeding provides best nutrition that you can give to your baby. It is also evident that lactation is good for mothers health as well. Evolution has designed breastfeeding in a way that it caters all nutritional need of your child. However modern medicine is quite new for evolution, that is why mothers body is not well prepared to filter unnecessary chemical found in medicines. It becomes a necessity to figure out which drug is safe and which drug is dangerous for your newborn while nursing. In this article we will understand function of Requip | Ropinirole 1 Mg and its suitability with breastfeeding.

What is Requip | Ropinirole 1 Mg used for?

Is Requip | Ropinirole 1 Mg usage safe while breastfeeding? If a lactating mother is using it can there be any effect on growth or development of infant?

Non-ergotamine and D2 /D3 Dopamine agonist drug.Indicated for Parkinson's disease and Restless Legs Syndrome (Evening dose). At latest update no published data on excretion into breast milk were found.Pharmacokinetic data do not allow easily predict the possibility of excretion into breastmilk, since a low protein-binding capacity would not prevent it, however, a large distribution volume would make it unlikely.Its low oral bioavailability which decreases even more when taken with meals, suggests that plasma concentration would reach a very low level in the infant, except during the neonatal period and in case of prematurity in which intestinal absorption may be increased.Side effects are neither frequent nor severe. Prolactin levels may be lowered with decreased production of breastmilk during the first weeks after birth.Gut absorption may be increased with higher plasma levels if taken together with Ciprofloxacin (Kaye 2000). Whenever it is used while breastfeeding, it would be wise avoiding it during the first 15 to 20 days and assess milk production and onset of nausea, drowsiness or irritability in infants.By waiting six hours after medication, excretion into breastmilk would possibly be lowered.

No information is available on the use of ropinirole during breastfeeding, but it suppresses serum prolactin and may interfere with breastfeeding. An alternate drug may be preferred, especially while nursing a newborn or preterm infant.

What should I do if I am breastfeeding mother and I am already exposed to Requip | Ropinirole 1 Mg?

I am nursing mother and my doctor has suggested me to use Requip | Ropinirole 1 Mg, is it safe?

If I am using Requip | Ropinirole 1 Mg, will my baby need extra monitoring?

Yes, Extra monitoring is required if mother is using Requip | Ropinirole 1 Mg and breastfeeding as it is considered unsafe for baby.

Who can I talk to if I have questions about usage of Requip | Ropinirole 1 Mg in breastfeeding?