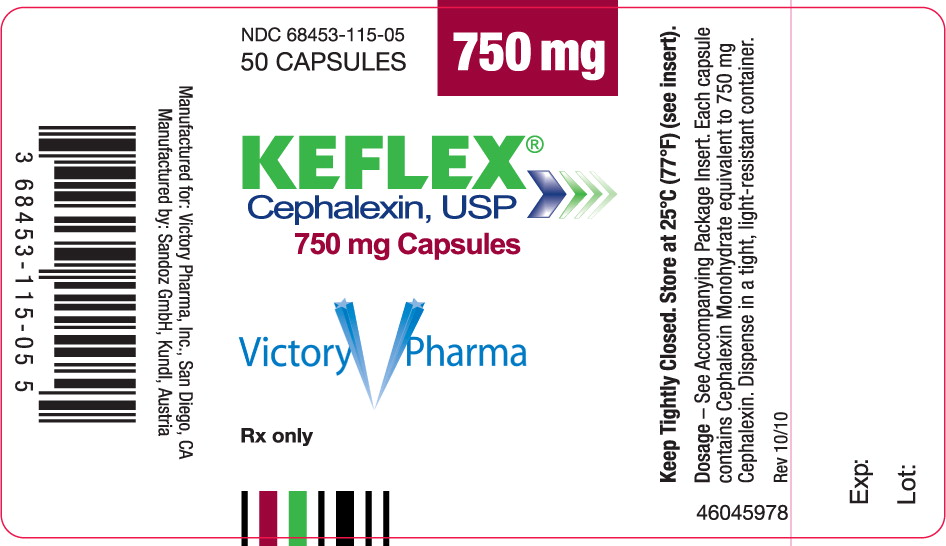 It is a well known fact that breastfeeding is best source of nutrition for infants. Breast milk provides minerals, vitamins and antibodies in most acceptable format when they need it. Nutrition taken by mother passes to breast-milk and same thing applies to medicines taken by mothers. Not all drugs cause problem for baby but some do. Lets analyze if Keflex | Cephalexin Anhydrous .01 G is safe for baby while breastfed.

What is Keflex | Cephalexin Anhydrous .01 G used for?

Keflex is indicated for the treatment of the following infections when caused by susceptible strains of the designated microorganisms: Respiratory tract infections caused by Streptococcus pneumoniae and Streptococcus pyogenes (Penicillin is the usual drug of choice in the treatment and prevention of streptococcal infections, including the prophylaxis of rheumatic fever. Keflex is generally effective in the eradication of streptococci from the nasopharynx; however, substantial data establishing the efficacy of Keflex in the subsequent prevention of rheumatic fever are not available at present.) Otitis media due to Streptococcus pneumoniae, Haemophilus influenzae, Staphylococcus aureus, Streptococcus pyogenes, and Moraxella catarrhalis Skin and skin structure infections caused by Staphylococcus aureus and/or Streptococcus pyogenes Bone infections caused by Staphylococcus aureus and/or Proteus mirabilis Genitourinary tract infections, including acute prostatitis, caused by Escherichia coli, Proteus mirabilis, and Klebsiella pneumoniae Note — Culture and susceptibility tests should be initiated prior to and during therapy. Renal function studies should be performed when indicated. To reduce the development of drug-resistant bacteria and maintain the effectiveness of Keflex and other antibacterial drugs, Keflex should be used only to treat or prevent infections that are proven or strongly suspected to be caused by susceptible bacteria. When culture and susceptibility information are available, they should be considered in selecting or modifying antibacterial therapy. In the absence of such data, local epidemiology and susceptibility patterns may contribute to the empiric selection of therapy.

Keflex | Cephalexin Anhydrous .01 G while breastfeeding safe or not? Can there be any side effects for infant while using it during breastfeeding?

First-generation cephalosporin. Oral administration. Like most cephalosporins for which data are available, excretion occurs in breast milk in very small amount and it is clinically insignificant (Kafetzis 1981, Matsuda 1984, Ilett 2006). Cephalosporins are widely used in the Pediatric practice with a good tolerance, even in the neonatal period, so it is very unlikely that in small amounts through milk would be a cause of problems in the infant. Be aware of the possibility of false negative results of cultures in febrile infants whose mothers are taking antibiotics as well as the possibility of gastroenteritis (Ito 1993) by altering the intestinal flora. Cephalexin is not excreted in significant amount into breast milk (Kafetzis 1981, Matsuda 1984, Ilett 2006). Be aware of false negative bacterial cultures in the infant when the mother is on antibiotics. Also, diarrheal disease due to imbalance of intestinal flora is possible (Ito 1993, Benyamini 2005). A case of a mother reportedly treated with Cephalexine and Probenecid occurred (Ilett 2006).

Limited information indicates that maternal cephalexin produces low levels in milk that are usually not expected to cause adverse effects in breastfed infants. Cephalexin is an alternative for the treatment of mastitis.[1][2] Occasionally disruption of the infant's gastrointestinal flora, resulting in diarrhea or thrush have been reported with cephalosporins, but these effects have not been adequately evaluated. Cephalexin is acceptable in nursing mothers.

What should I do if already breastfed my kid after using Keflex | Cephalexin Anhydrous .01 G?

It is always a good idea to keep your healthcare provider or doctor informed about your drug usage during pregnancy and breastfeeding but if you have not informed your doctor about Keflex | Cephalexin Anhydrous .01 G and have used it then do not panic as Keflex | Cephalexin Anhydrous .01 G is mostly safe in breastfeeding and should not cause any harm to your baby.

I am nursing mother and my doctor has suggested me to use Keflex | Cephalexin Anhydrous .01 G, is it safe?

Definitely, Keflex | Cephalexin Anhydrous .01 G is safe in lactation for baby. No wonder your doctor has recommended it.

If I am using Keflex | Cephalexin Anhydrous .01 G, will my baby need extra monitoring?

Who can I talk to if I have questions about usage of Keflex | Cephalexin Anhydrous .01 G in breastfeeding?