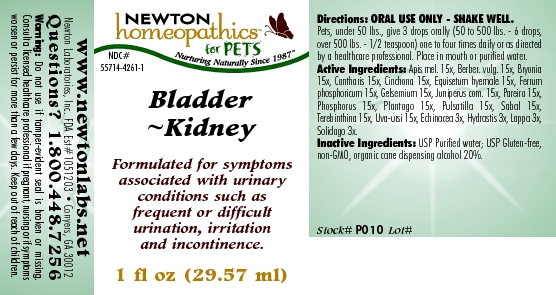 There are high number of clear evidence that breastfeeding provides best nutrition that you can give to your baby. It is also evident that lactation is good for mothers health as well. Evolution has designed breastfeeding in a way that it caters all nutritional need of your child. However modern medicine is quite new for evolution, that is why mothers body is not well prepared to filter unnecessary chemical found in medicines. It becomes a necessity to figure out which drug is safe and which drug is dangerous for your newborn while nursing. In this article we will understand function of Bladder Kidney and its suitability with breastfeeding.

What is Bladder Kidney used for?

SECTION Bladder Kidney Formulated for symptoms associated with urinary conditions such as frequent or difficult urination, irritation and incontinence.

Purpose: OTC - PURPOSE SECTION Formulated for symptoms associated with urinary conditions such as frequent or difficult urination, irritation and incontinence.

Is Bladder Kidney usage safe while breastfeeding? If a lactating mother is using it can there be any effect on growth or development of infant?

Roots and bark are used. It contains Berberine that may be a cause of gastritis, nephritis, phototoxicity and severe jaundice by displacement of albumin -linked bilirubin: higher risk of kernicterus to newborns, which is greater in cases of 6-Glucose-PD deficiency. It is popularly widely used, however, its effectiveness has not been shown. Use not approved by the Commission E of German Ministry of Health. It should be avoided. 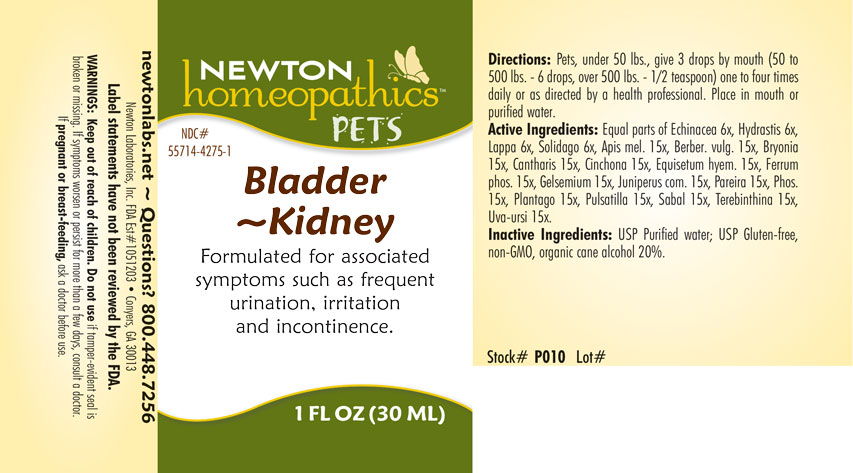 Cinchona alkaloid used in the prophylaxis and treatment of malaria (PĂ©rez 2009). Administered orally or intravenously. It is excreted in breast milk in clinically insignificant amounts (Mathew 2004, Phillips 1986, Terwilliger 1934), much lower than the dose used in newborns and infants (Fulton 1992).No problems have been observed in infants whose mothers were taking it (FDA 2008, Terwilliger 1934). Its use is authorized in infants and children.Avoid in cases of glucose-6-phosphate dehydrogenase deficiency (Mathew 2004, WHO/UNICEF 2002, Fulton 1992). American Academy of Pediatrics: medication usually compatible with breastfeeding (AAP 2001). WHO list of essential medicines: compatible with breastfeeding (WHO / UNICEF, 2002).

The fruits from this palm tree with a high content of fatty acids (oleic, lauric, myristic, linoleic and linolenic acids) are used. They also contain flavonoids and phytosterols (beta-sitosterol) that exert both an antiandrogenic and estrogenic action It is used for treatment of prostate hyperplasia. Also used, however on a poor scientific basis, for treatment of androgenic alopecia and hirsutism (Murugusundram 2009, Rossi 2012, Wessagowit 2016).. It has been related to some problems such as hormonal disruption when it was used in girls (Morabito 2015), but mostly without serious side effects (Agbabiaka 2009). At latest update no published data on excretion into breast milk were found. No likely risk when topically used, whenever it is not applied on the chest.A moderate consumption would not represent a risk while breastfeeding. It may be prudent to avoid using it during the neonatal period (within first month after birth) and in cases of prematurity. Cautions when taking herbal teas:1. Make sure it is obtained from a reliable source: reportedly, poisonings have occurred due to confusion after using another plant with toxic effects, some others contain heavy metals that may cause poisoning and others may cause food poisoning due to contamination with bacteria or fungi.2. Do not take it excessively. "Natural" products are not always good in any amount: plants contain active substances from which are made many compounds of our traditional pharmacopoeia that can cause poisoning if consumed in exaggerated quantities or for long periods.

Shrub leaves are used. It contains arbutoside or arbutin as an active substance, also, tannins, flavonoids, ursolic acid and hydroquinone. The Commission E of German Ministry of Health approves it as a diuretic and anti-inflammatory medicament for the urinary tract. As a diuretic drug it may decrease breast milk production. When took in high amount it can irritate the uterus and hydroquinone may be toxic for the liver.

The root is used. It contains inulin, mucilage, phenol acids and phytosterols. Indication after Commission E of German Ministry of Health: none, since no beneficial effect has been shown.

Pulsatilla (Anemone pulsatilla and other related species) contains ranunculin, protoanemonin, and anemonin as well as triterpene saponins and flavonoids. The fresh plant is extremely irritating to the skin, gastrointestinal tract and mucous membranes. Allergic reactions have been reported to pulsatilla. Homeopathic preparations of pulsatilla are reportedly used for sore nipples and mastitis,[1] to reduce an overabundant milk supply,[2] or to increase milk supply.[3] Galactogogues should never replace evaluation and counseling on modifiable factors that affect milk production.[4] No scientifically valid clinical trials support either of these uses. Because of a lack of information, other agents may be preferred in nursing mothers. Dietary supplements do not require extensive pre-marketing approval from the U.S. Food and Drug Administration. Manufacturers are responsible to ensure the safety, but do not need to the safety and effectiveness of dietary supplements before they are marketed. Dietary supplements may contain multiple ingredients, and differences are often found between labeled and actual ingredients or their amounts. A manufacturer may contract with an independent organization to verify the quality of a product or its ingredients, but that does certify the safety or effectiveness of a product. Because of the above issues, clinical testing results on one product may not be applicable to other products. More detailed

Echinacea species (Echinacea angustifolia, Echinacea purpurea, Echinacea pallida) contain high molecular weight polysaccharides (e.g., heteroxylan, arabinogalactan) and lower molecular weight compounds (e.g., alkylamides, caffeoyl conjugates such as cichoric acid and echinacosides), but no single chemical is known to be responsible for echinacea's biological activity. Some products have been standardized based on echinacoside, and others on cichoric acid. Echinacea has no specific uses during breastfeeding, but is commonly used orally to treat or prevent upper respiratory infections. It is also used topically to treat skin infections. Excretion of some of the purportedly active alkamides was found in breastmilk in one mother. No data exist on the safety and efficacy of echinacea in nursing mothers or infants. In general, echinacea is well tolerated with gastrointestinal upset, diarrhea and constipation, skin rash and rarely allergic reactions reported. It may also alter the metabolism of some dugs metabolized by the P450 enzyme system. Some sources indicate that echinacea is safe in recommended doses,[1] while others recommend avoiding it during breastfeeding because of the lack of published safety data. Dietary supplements do not require extensive pre-marketing approval from the U.S. Food and Drug Administration. Manufacturers are responsible to ensure the safety, but do not need to the safety and effectiveness of dietary supplements before they are marketed. Dietary supplements may contain multiple ingredients, and differences are often found between labeled and actual ingredients or their amounts. A manufacturer may contract with an independent organization to verify the quality of a product or its ingredients, but that does certify the safety or effectiveness of a product. Because of the above issues, clinical testing results on one product may not be applicable to other products. More detailed information #about dietary supplements# is available elsewhere on the LactMed Web site.

Goldenseal (Hydrastis canadensis) root contains berberine and other isoquinoline alkaloids. Goldenseal has traditionally been used as an anti-infective both systemically and topically, although high-quality studies of its efficacy and safety are lacking. It has also been used to mask illicit drugs in the urine, although it appears to be ineffective with modern laboratory methods. Goldenseal has been used topically by nursing mothers to treat sore nipples.[1] No data exist on the excretion of any components of goldenseal into breastmilk or on the safety and efficacy of goldenseal in nursing mothers. Berberine can displace bilirubin from serum albumin, causing concern about exposure of newborn infants, because bilirubin can build up in the infant's brain, causing brain damage. However, the extent of berberine's passage from the mother to the infant is unknown. Most sources recommend avoiding exposure of neonates to goldenseal via breastfeeding or otherwise.[2][3][4] Dietary supplements do not require extensive pre-marketing approval from the U.S. Food and Drug Administration. Manufacturers are responsible to ensure the safety, but do not need to the safety and effectiveness of dietary supplements before they are marketed. Dietary supplements may contain multiple ingredients, and differences are often found between labeled and actual ingredients or their amounts. A manufacturer may contract with an independent organization to verify the quality of a product or its ingredients, but that does certify the safety or effectiveness of a product. Because of the above issues, clinical testing results on one product may not be applicable to other products. More detailed information #about dietary supplements# is available elsewhere on the LactMed Web site.

All parts of the false jasmine usually contain toxic alkaloids. Eating just one flower has reportedly been lethal to children. The plant can also cause skin allergies in some people and it is possible that the plant toxins can be absorbed through the skin, especially if there are cuts. It’s not recommended to use false jasmine while breastfeeding. It is acceptable in homeopathic preparation.

Next to calcium, phosphorus is the most abundant mineral in the body, making up about 1% of total body weight. Calcium, which gives strength to bones and teeth, needs to be combined with another mineral, such as phosphorous, to become stabilized before it can be effective.

Phosphorus also helps to release energy from food as it plays an important role in the metabolism of carbohydrate, fat and protein. Phosphorus is naturally found in many food sources and phosphorus supplementation while breastfeeding is mostly safe.

You can easily get all the phosphorus you need from a well-balanced diet (even though most prenatal vitamins dont contain phosphorus). For example, 2 cup of yogurt provides nearly all your phosphorus for the day.

Warning: Consuming high doses of phosphorus for a short time can cause diarrhea or stomach pain. The long term over-consumption of foods high in phosphorus can deplete calcium resources and lead to reduced bone mass, which means that bones are more likely to fracture.

What should I do if I am breastfeeding mother and I am already exposed to Bladder Kidney?

I am nursing mother and my doctor has suggested me to use Bladder Kidney, is it safe?

If I am using Bladder Kidney, will my baby need extra monitoring?

Who can I talk to if I have questions about usage of Bladder Kidney in breastfeeding?