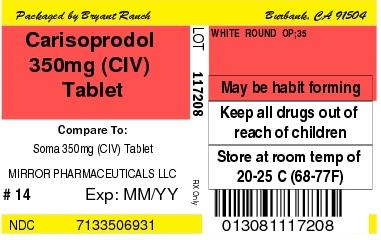 What is Carisoprodol 350 Mg used for?

Is Carisoprodol 350 Mg usage safe while breastfeeding? If a lactating mother is using it can there be any effect on growth or development of infant?

Carisoprodol 350 Mg contains only one active ingredient that is Carisoprodol. We have analyzed the usage of Carisoprodol in breastfeeding and our analysis suggest that Carisoprodol poses Low risk for infant while breastfeeding and hence Carisoprodol 350 Mg itself shall be considered Low risk item for breastfeeding.
Statement of Manufacturer/Labeler about breastfeeding usage
8.3 Nursing Mothers Very limited data in humans show that carisoprodol is present in breast milk and may reach concentrations two to four times the maternal plasma concentrations. In one case report, a breast-fed infant received about 4 to 6% of the maternal daily dose through breast milk and experienced no adverse effects. However, milk production was inadequate and the baby was supplemented with formula. In lactation studies in mice, female pup survival and pup weight at weaning were decreased. This information suggests that maternal use of carisoprodol may lead to reduced or less effective infant feeding (due to sedation) and/or decreased milk production. Caution should be exercised when carisoprodol is administered to a nursing woman.

Skeletal muscle relaxant with sedative effects on the central nervous system. It is metabolized to meprobamate.Indicated on low back pain. It is excreted into breast milk in a clinically non-significant amount (Nordeng 2001, Bailey 2002, Briggs 2008) without problems being observed on infants whose mothers were receiving this medication, (Nordeng 2001), except for a mild sedation with higher maternal drug doses (Briggs 2008) .Plasma levels in the infant were undetectable (Briggs 2008). Carisoprodol use increases the risk of abuse and addictive behavior, intoxication and possible psychomotor impairment (Bailey 2002, EMA 2007) being such a reason to be withdrawn from the market in some countries. The European Medicines Agency (EMA) has recommended to withhold authorizations for marketing of medicines that contains Carisoprodol (EMA 2007, Reeves 2012, Bramases 2012). If administered during breastfeeding, it is advisable to use a minimum effective dose and monitor a possible sedation on the infant and an inadequate milk production (Sachs 2013).

If carisoprodol is required by the mother, it is not necessarily a reason to discontinue breastfeeding. Slight sedation has occurred in a breastfed newborn infant who was exposed during pregnancy and lactation; sedation might be more pronounced in newborns who are exposed for the first time during nursing. Other agents may be preferred, especially while nursing a newborn or preterm infant, or when other drugs that can cause sedation are used simultaneously.

What should I do if I am breastfeeding mother and I am already exposed to Carisoprodol 350 Mg?

Carisoprodol 350 Mg is in the category of low risk, if you have already used it then its not a big deal if health and behavior of baby is good. However your health care provider shall be aware of the fact that you have used Carisoprodol 350 Mg so you should inform him based on your convenience.

I am nursing mother and my doctor has suggested me to use Carisoprodol 350 Mg, is it safe?

If I am using Carisoprodol 350 Mg, will my baby need extra monitoring?

Not much monitoring required while using Carisoprodol 350 Mg

Who can I talk to if I have questions about usage of Carisoprodol 350 Mg in breastfeeding?