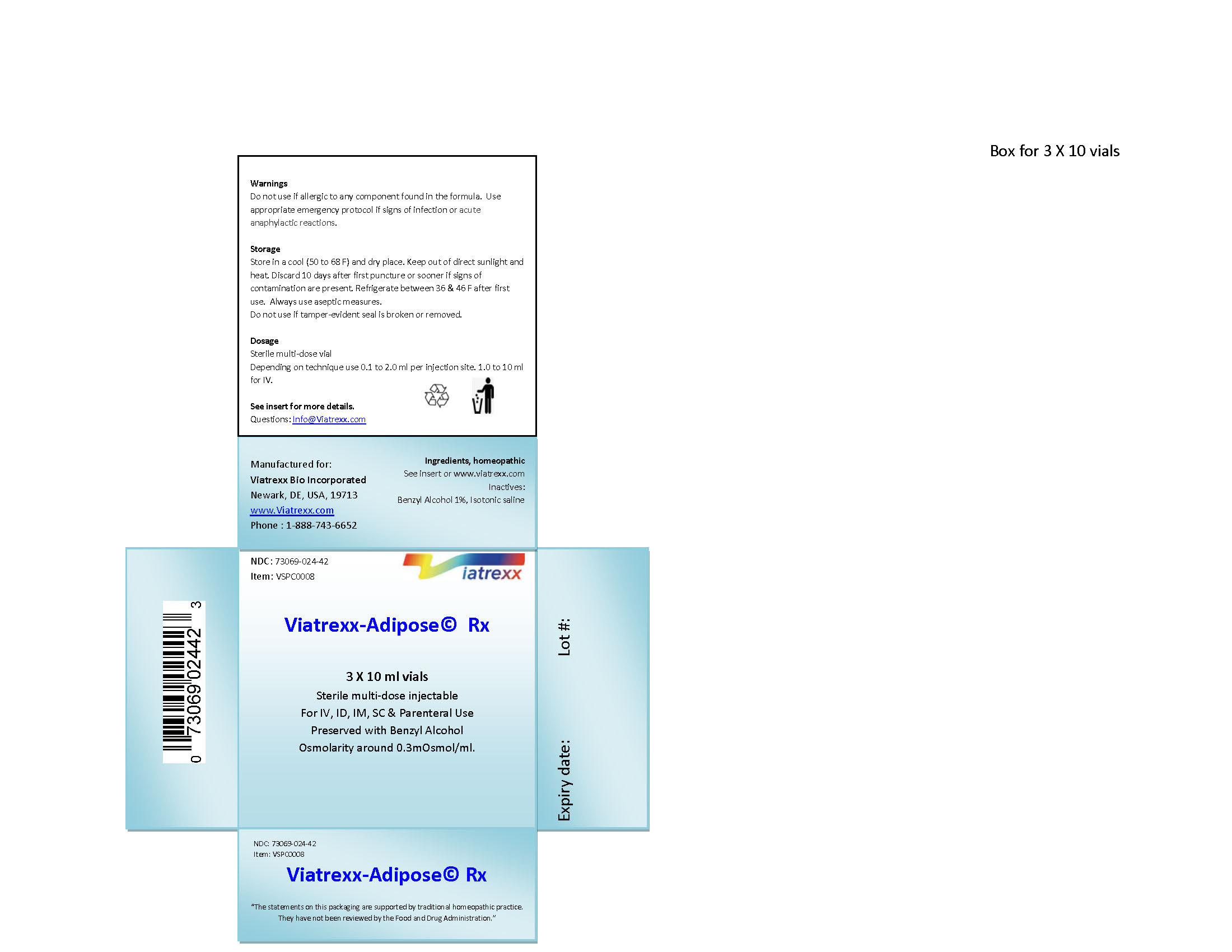 What is Viatrexx-adipose used for?

and Use Viatrexx-Adipose a sterile, injectable, biodegradable, clear isotonic liquid that is injected into the various layers of the skin, muscles, ligaments, joints, other body tissues or added to an IV, either as a push or into the bag.

Is Viatrexx-adipose usage safe while breastfeeding? If a lactating mother is using it can there be any effect on growth or development of infant?

Viatrexx-adipose Contains 33 active ingredients that are Epinephrine, Bos taurus artery, Sus scrofa artery, Adenosine triphosphate, Adenosine cyclic phosphate, Centella asiatica, Anhydrous citric acid, Coenzyme a, Colchicum autumnale bulb, Fumaric acid, Interleukin-10, Levocarnitine, Lactic acid, Pancrelipase lipase, Beef liver, Pork liver, Sus scrofa lymph, Bos taurus lymph, Sodium diethyl oxalacetate, Sodium pyruvate, Sus scrofa pituitary gland, Bos taurus pituitary gland, Quinhydrone, Succinic acid, Bos taurus parathyroid gland, Sus scrofa parathyroid gland, Bos taurus vein, Sus scrofa vein, Yohimbine, Ferrous cation, Mecasermin, Potassium aspartate, Momordica balsamina whole. We do have breastfeeding analysis and safety rating of some of the active ingredients but unfortunately we do not have any information of some of active ingredients used. Below we have provided whatever information we do have. But please do not take any decision based on below provided information and contact your health care provider as this information is incomplete.
Statement of Manufacturer/Labeler about breastfeeding usage
Nursing Mothers It is not known whether the benzyl alcohol or any of the ingredients is excreted in human milk. Caution should be exercised when products with benzyl alcohol are administered to nursing woman.

Used as a systemic drug for cardiac resuscitation and locally in topical anesthetic preparations, epidural anesthesia, eye drops (mydriatic), and nasal drops (vasoconstrictor). At last update no published data on excretion in breast milk were found.Its rapid metabolism (short Tmax and T½) makes it unlikely an excretion into milk in significant amounts. It is destroyed in the gastrointestinal tract. The low oral-bioavailability makes its levels into infant's plasma, that would be absorbed from ingested breast milk, be nil or negligible. Maintained high intravenous doses decrease milk production by interfering with the secretion of prolactin especially the early postpartum-weeks, because when breastfeeding is well established, prolactin levels do not correlate with milk production any longer. No problems related to lactation have been observed due to epidural anesthesia in which adrenaline is used. 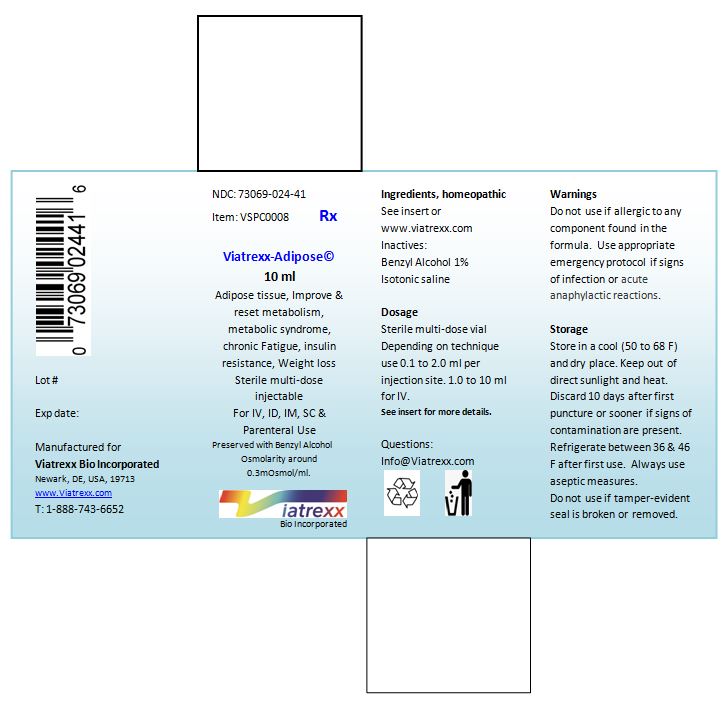 At latest update, relevant published data on excretion into breast milk were not found. It contains triterpenic saponins (asiaticoside and madecassoside), tannins, phytosterols and essential oil. Frequent and exaggerated use of triterpenes may cause liver damage. Properties that are attributed for topical use (some clinically tested) like are healing of wound and venous tonic. There is no proof on effectiveness when used by mouth. Because of a low or nil systemic absorption through skin or vaginal mucosa, the topical use is believed be compatible with breastfeeding. Do not use it on the breast or clean it thoroughly to avoid ingestion by the infant. Avoid oral administration.

Product that is naturally found in most fruits, especially citrus ones, and which is industrially produced through fermentation of sugar by the fungus Aspergillus niger. It is used in medical compounds as effervescent, to treat intestinal affections, as antioxidant, as an agent for alkalizing urine and dissolution of urinary tract stones. In the food industry it is used as additive (E 330) due to its antioxidant, preservative and flavoring properties. Devoid of toxicity when used at appropriate doses.

It is used for treatment of Gout, Familial Mediterranean Fever. As well as for other conditions like Amyloidosis, Behçet's Syndrome, Pericarditis, Primary Biliary Cirrhosis and Pyoderma gangrenosum. It is excreted in breast milk in quantities that differ according to different published studies, from no clinically significant in some, until being important in others, but there have been no problems in infants whose mothers were treated, even after months, with undetectable plasma levels in these infants. The concomitant use of macrolide antibiotics and fruit juices (both the mother and the infant) , especially grape-fruit, is not recommended since they may interfere with bile excretion and greatly increase toxicity. The American Academy of Breastfeeding rates it as compatible with breastfeeding. List of Essential Medicines of WHO (2002): compatible with breastfeeding 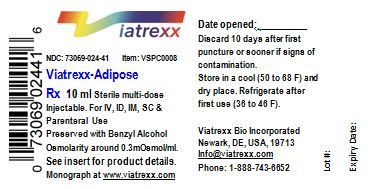 Amino acid that is present in many foods, among them the milk. Indication is the treatment of Primary Deficiency of Carnitine, or, Secondary Deficiency due to Hemolysis, Myocardiopathy and other diseases. Only Levocarnitine is effective as a supplement, with the consumption of D-carnitine regarded as a risk for deficiency. Normal levels in the milk are not modified by the consumption of supplements of Carnitine. Mean concentration level within the first month is about 10 to 12 mg/L, with lower levels in the next following months. The supplementation with Carnitine of the milk for premature infants does not improve their weight increment, with no proof of a beneficial effect.

Proteolytic and lipolytic enzyme which is derived from mammalian pancreas that has protease, lipase and amylase activity. Indicated for treatment of cystic fibrosis and chronic pancreatitis. At latest update no published data on excretion into breast milk was found. Its high molecular weight and poor intestinal absorption make it highly unlikely a significant passage to the milk.A low oral bioavailability hinders the passage into infant plasma from ingested milk. It is a medication used in children and young infants.

Benzene derivative which is topically used with creams and solutions (2-4%) as a bleaching agent for several skin disorders associated to hyper-pigmentation. In industry it is used as photographic developer. TLV or threshold limit value which means maximum exposure limit for workers is 2 mg / m3 (Flickinger 1976). At latest update relevant published data were not found on excretion into breast milk. It is well absorbed through the skin, both when used as a therapeutic agent (Bucks 1998, Wester 1998, Westerhof 2005, Andersen 2010, Bozzo 2011) or industrial use (Barber 1995, McGregor 2007), however, a significant excretion into breastmilk is not likely for their lack of fat solubility. There is controversy and doubt about a possible mutagenic and carcinogenic effect (Kooyers 2004, FDA 2006, Levitt 2007, Andersen 2010), so it does not seem wise a chronic or continued use while breastfeeding. Do not apply it on the breast to prevent ingestion by the infant; otherwise, do it just after a meal and clean the nipple thoroughly with water before the next feed.Do not apply it over large areas or on long-term treatments to avoid an excessive systemic absorption.

Several ferrous salts of iron (ascorbate, aspartate, citrate, chloride, fumarate, gluconate, lactate, oxalate, succinate, sulfate, glycine sulfate, etc.) are used in oral administration for treating or preventing iron deficiency anemia.Its molecular weight varies from 170 for the fumarate and succinate, and from 280 for lactate and sulfate to 400 for aspartate and ascorbate. Characteristics of iron metabolism in the body make unlikely that it would be excreted in a significant amount into breast milk.It is a medication used for treatment of Neonatal Anemia in premature babies. Iron is excreted in small amounts in human milk, usually being enough for covering the daily needs of infants due to its high bioavailability. There is no correlation between mother's daily intake of iron and its concentration in breast milk.Iron supplementation to the mother does not increase levels of iron in breast milk or infant plasma significantly. Excessive supplementation can reduce the zinc concentration in milk. WHO List of Essential Medicines 2002: compatible with breastfeeding.

No information is available on the use of epinephrine during breastfeeding. Because of its poor oral bioavailability and short half-life, any epinephrine in milk is unlikely to affect the infant. High intravenous doses of epinephrine might reduce milk production or milk letdown. Low-dose intramuscular (such as Epi-Pen), epidural, topical, inhaled or ophthalmic epinephrine are unlikely to interfere with breastfeeding. To substantially diminish the effect of the drug after using eye drops, place pressure over the tear duct by the corner of the eye for 1 minute or more, then remove the excess solution with an absorbent tissue.

Long-term prophylactic maternal doses of colchicine up to 1.5 mg daily produce levels in milk that result in the infant receiving less than 10% of the maternal weight-adjusted dosage. The highest milk levels occur 2 to 4 hours after a dose, so avoiding breastfeeding during this time can minimize the infant dose, although some clinicians simply recommend taking the drug after nursing. No adverse effects in breastfed infants have been reported in case series and a case-control study and some authors consider colchicine safe during breastfeeding in women being treated for familial Mediterranean fever or rheumatic conditions.[1][2][3][4]

What if I already have used Viatrexx-adipose?

I am nursing mother and my doctor has suggested me to use Viatrexx-adipose, is it safe?

If your doctor considers Viatrexx-adipose safe enough to prescribe for you that means its benefits should outweigh its known risks for you.

If I am using Viatrexx-adipose, will my baby need extra monitoring?

Who can I talk to if I have questions about usage of Viatrexx-adipose in breastfeeding?