There are high number of clear evidence that breastfeeding provides best nutrition that you can give to your baby. It is also evident that lactation is good for mothers health as well. Evolution has designed breastfeeding in a way that it caters all nutritional need of your child. However modern medicine is quite new for evolution, that is why mothers body is not well prepared to filter unnecessary chemical found in medicines. It becomes a necessity to figure out which drug is safe and which drug is dangerous for your newborn while nursing. In this article we will understand function of Vital Ii and its suitability with breastfeeding.

What is Vital Ii used for?

Is Vital Ii usage safe while breastfeeding? If a lactating mother is using it can there be any effect on growth or development of infant? 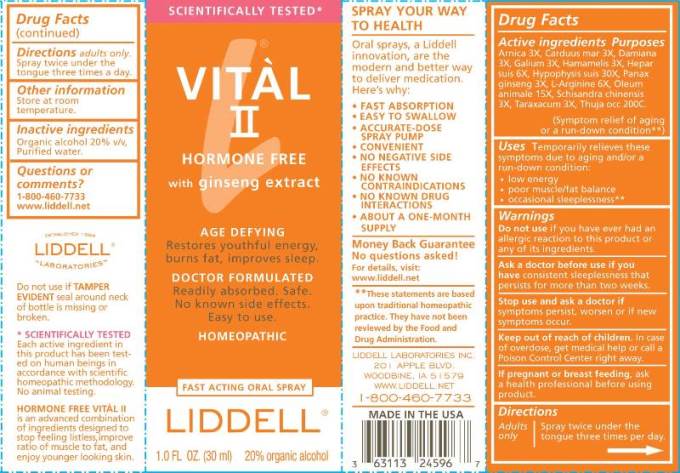 Milk thistle is a herb from which its fruits are used. It contains flavonolignans, silymarin and especially silibinin isomers, silychristin and silydianin, flavonoids, steroids and estrogen-like compounds. Attributed properties: Liver Protector.Indications based on the Commission E of the German Ministry of Health: cholelithiasis, liver disorders. Devoid of toxicity. It is excreted into breast milk in little or no amount.There is no evidence of its effectiveness as a galactogogue. Two studies have been performed (one with cows and the other with women) trying to show a galactogogue effect, but both are limited by a very flawed methodology.Best galactogogue is a frequent and on-demand breastfeeding together witn an appropriate technique. Precaution is recommended before taking herbal infusions:1. Ensure a reliable source: poisoning occurred by confusion with another plant that resulted to be toxic, poisoning from heavy metals and food poisoning by contamination with bacteria or fungi.2. Avoid excessive consumption. The "natural" products are not good in any amount: plants contain active substances from which come out much of our traditional pharmacopoeia and can cause poisoning if eaten in exaggerated quantity or prolonged time.

Leaves of the plant and sometimes bark also are used. It contains tannins, pro anthocyanidins and flavonic heterosides (quercitrin, isoquercitrin). Venous-tonic and anti-inflammatory properties have not been well established. The Commission E of the German Ministry of Health authorizes its use locally and by suppositories.

Roots of shrub are used. It contains saponins (ginsenosides). Attributed properties that are not based on proven clinical results are: stimulant of CNS, inductor of hypoglycemia and hypolipidemia, agonistic action on estrogen secretion. At latest update, relevant published data on excretion into breast milk were not found. It is a widely used plant on many cultures and countries for medical purposes, even during pregnancy and breastfeeding with no side-effects reported. Based on its low toxicity, an occasional and moderate use is not regarded as risky while breastfeeding. The excessive use of estrogenic agonists may decrease milk production.

Amino acid which is present in meat and dairy products. It induces stimulation of Nitric Oxide production (vasodilation) and release of Insulin and Growth Hormone. Attributed benefit on health not confirmed. On latest update relevant data on breastfeeding was not found. Possibly not harmful while breastfeeding if abusive and continuous use is avoid.

The fruits and seeds are used from this shrub, which grows in Russia, China, Japan and Korea. Used in traditional Chinese medicine attributing to it astringent, invigorating, detoxifying and liver protection properties, none of which have been scientifically proven (WHO 2007: p.296-313). Since the last update we have not found published data on its excretion in breast milk. Free of toxicity, moderate use during breastfeeding would have little or no risk. Precautions when taking plant preparations: 1. Ensure that they are from a reliable source: poisoning has occurred due to confusing one plant with another with toxic properties, as well as poisoning from heavy metals extracted from the ground and food poisoning due to contamination with bacteria or fungi. 2. Do not take in large amounts; follow recommendations from professional experts in phytotherapy. "Natural" products are not always good in any quantity: plants contain active substances from which much of our traditional pharmacopoeia has been obtained and can result in poisoning or act as endocrine disruptors if taken in excessive amounts or time periods.

The roots and leaves of the plant in salads both as food and herbal medicine are used.It contains inulin, terpenes, phytosterols, flavonoids, coumarins and potassium salts in large quantities.Attributed Properties: cholagogue, laxative, orexigenic. diureticIndication by the German Commission E Ministry of Health: dyspepsia, cholelithiasis, anorexia.Indications by the European Medicament Agency (EMA): diuretic. Non toxic. There is no evidence of its effectiveness as galactogogue.Best galactogogue is a frequent on-demand breastfeeding and proper technique. Its wide use, low toxicity and since it is also consumed as food, a moderate consumption during lactation is considered of little or no risk. Precaution is recommended before taking herbal infusions:1. Ensure a reliable source: poisoning occurred by confusion with another plant that resulted to be toxic, poisoning from heavy metals and food poisoning by contamination with bacteria or fungi.2. Avoid excessive consumption. The "natural" products are not good in any amount: plants contain active substances from which come out much of our traditional pharmacopoeia and can cause poisoning if eaten in exaggerated quantity or prolonged time.

Milk thistle (Silybum marianum) contains silymarin which is a mixture of flavonolignans, mainly silibinin (also known as silybin), as well as silycristine, silydianin, quercetin and taxifolin.[1] Silymarin is a standardized preparation extracted from the fruits (seeds) of milk thistle. Milk thistle is a purported galactogogue,[2] and is included in some proprietary mixtures promoted to increase milk supply; however, no scientifically valid clinical trials support this use.[3][4][5] Although a study on the high potency purified milk thistle component, silymarin, and a phosphatidyl conjugate of silymarin indicated some galactagogue activity, this does not necessarily imply activity of milk thistle itself. Galactogogues should never replace evaluation and counseling on modifiable factors that affect milk production.[6] Limited data indicate that the silymarin components are not excreted into breastmilk in measurable quantities. Additionally, because silymarin components are poorly absorbed orally, milk thistle is unlikely to adversely affect the breastfed infant. Milk thistle and silymarin are generally well tolerated in adults with only mild side effects such as diarrhea, headache, and skin reactions. It might increase the metabolism of some drugs. Rarely, severe allergies and anaphylaxis are reported. Avoid in patients with known allergy to members of the aster (Compositea or Asteraceae) family, such as daisies, artichokes, common thistle, and kiwi because cross-allergenicity is possible. Dietary supplements do not require extensive pre-marketing approval from the U.S. Food and Drug Administration. Manufacturers are responsible to ensure the safety, but do not need to the safety and effectiveness of dietary supplements before they are marketed. Dietary supplements may contain multiple ingredients, and differences are often found between labeled and actual ingredients or their amounts. A manufacturer may contract with an independent organization to verify the quality of a product or its ingredients, but that does certify the safety or effectiveness of a product. Because of the above issues, clinical testing results on one product may not be applicable to other products. More detailed information #about dietary supplements# is available elsewhere on the LactMed Web site.

Thuja is one of the most common remedies used for warts. Topical Usage of Thuja for wart is likely safe while breastfeeding. We do not have sufficient safety usage data for Thuja oral consumption, However its likely unsafe to use thuja orally while breastfeeding.

What should I do if I am breastfeeding mother and I am already exposed to Vital Ii?

I am nursing mother and my doctor has suggested me to use Vital Ii, is it safe?

If I am using Vital Ii, will my baby need extra monitoring?

Who can I talk to if I have questions about usage of Vital Ii in breastfeeding?