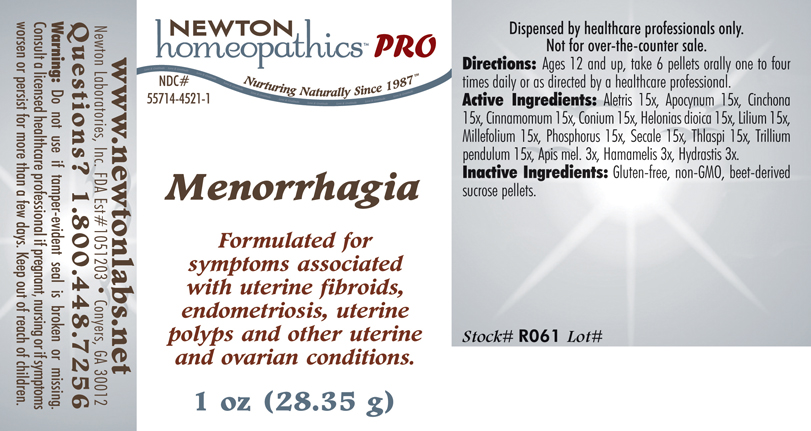 There are high number of clear evidence that breastfeeding provides best nutrition that you can give to your baby. It is also evident that lactation is good for mothers health as well. Evolution has designed breastfeeding in a way that it caters all nutritional need of your child. However modern medicine is quite new for evolution, that is why mothers body is not well prepared to filter unnecessary chemical found in medicines. It becomes a necessity to figure out which drug is safe and which drug is dangerous for your newborn while nursing. In this article we will understand function of Menorrhagia and its suitability with breastfeeding.

What is Menorrhagia used for?

SECTION Menorrhagia Formulated for associated symptoms such as uterine fibroids, uterine polyps, endometriosis and other uterine and ovarian conditions.

Is Menorrhagia usage safe while breastfeeding? If a lactating mother is using it can there be any effect on growth or development of infant?

The bark of tender branches is used. Constituents are Cinnamaldehyde and Eugenol. There are not clinical trials that would had supported any property that may mean a benefit for health, as those traditionally assigned to Cinnamon like spasmolytic, carminative and anti-diarrheal ones. At latest update relevant published data on its excretion into breast milk were not found. Cinnamon is commonly used as spice and flavoring for food and infusions. Out of occasional irritation on skin and mucosa, there is a lack of toxicity and side-effects at the usual dosage. Do not overcome the usual amount used for food preparation.

A parasitic fungus from the ear of some cereals, particularly rye, which since ancient times has caused epidemics of a serious disease, ergotism (Florea 2017, Belser 2013, Lee 2009). It has a complex composition, highlighting the ergoline alkaloids: lysergic acid amides such as ergometrine and ergopeptines such as ergotamine and ergotoxine (Florea 2017, Hulvová 2013) that act on adrenergic, dopaminergic and serotonergic receptors. Since the last update, we have not found published data on its excretion in breast milk. Ergot alkaloids have oxytocic, vasoconstrictive and lactation-inhibiting effects by inhibiting prolactin, among many others (Florea 2017, Hulvová 2013, Lee 2010, Lee 2009). Indications from the German Ministry of Health’s Commission E: none. Due to its serious adverse reactions and toxicity, natural alkaloids are not used in therapy, and there are recommendations for their withdrawal from sale (EMA 2014). At present, semisynthetic derivatives such as methylergometrine, dihydroergotamine, dihydroergocristine, bromocriptine and lisuride are used, among others. See below the information of these related products:

Leaves of the plant and sometimes bark also are used. It contains tannins, pro anthocyanidins and flavonic heterosides (quercitrin, isoquercitrin). Venous-tonic and anti-inflammatory properties have not been well established. The Commission E of the German Ministry of Health authorizes its use locally and by suppositories.

Goldenseal (Hydrastis canadensis) root contains berberine and other isoquinoline alkaloids. Goldenseal has traditionally been used as an anti-infective both systemically and topically, although high-quality studies of its efficacy and safety are lacking. It has also been used to mask illicit drugs in the urine, although it appears to be ineffective with modern laboratory methods. Goldenseal has been used topically by nursing mothers to treat sore nipples.[1] No data exist on the excretion of any components of goldenseal into breastmilk or on the safety and efficacy of goldenseal in nursing mothers. Berberine can displace bilirubin from serum albumin, causing concern about exposure of newborn infants, because bilirubin can build up in the infant's brain, causing brain damage. However, the extent of berberine's passage from the mother to the infant is unknown. Most sources recommend avoiding exposure of neonates to goldenseal via breastfeeding or otherwise.[2][3][4] Dietary supplements do not require extensive pre-marketing approval from the U.S. Food and Drug Administration. Manufacturers are responsible to ensure the safety, but do not need to the safety and effectiveness of dietary supplements before they are marketed. Dietary supplements may contain multiple ingredients, and differences are often found between labeled and actual ingredients or their amounts. A manufacturer may contract with an independent organization to verify the quality of a product or its ingredients, but that does certify the safety or effectiveness of a product. Because of the above issues, clinical testing results on one product may not be applicable to other products. More detailed information #about dietary supplements# is available elsewhere on the LactMed Web site.

Hemlock is a very poisonous plant. In fact, all parts of the plant are toxic. Hemlock is most poisonous during the early stages of growth in the spring, but it is dangerous at all stages of growth. The poisons in hemlock are so deadly that people have died after eating animals that had eaten hemlock parts.

Despite serious safety concerns, hemlock is used for bronchitis, whooping cough, asthma, arthritis, and other conditions, but there is no good scientific evidence to support these uses. Due to extreme dilution it could be safe in homeopathic medicine however not much study has been done hence shall be avoided.

Next to calcium, phosphorus is the most abundant mineral in the body, making up about 1% of total body weight. Calcium, which gives strength to bones and teeth, needs to be combined with another mineral, such as phosphorous, to become stabilized before it can be effective.

Phosphorus also helps to release energy from food as it plays an important role in the metabolism of carbohydrate, fat and protein. Phosphorus is naturally found in many food sources and phosphorus supplementation while breastfeeding is mostly safe.

You can easily get all the phosphorus you need from a well-balanced diet (even though most prenatal vitamins dont contain phosphorus). For example, 2 cup of yogurt provides nearly all your phosphorus for the day.

Warning: Consuming high doses of phosphorus for a short time can cause diarrhea or stomach pain. The long term over-consumption of foods high in phosphorus can deplete calcium resources and lead to reduced bone mass, which means that bones are more likely to fracture.

What should I do if I am breastfeeding mother and I am already exposed to Menorrhagia?

I am nursing mother and my doctor has suggested me to use Menorrhagia, is it safe?

If I am using Menorrhagia, will my baby need extra monitoring?

Who can I talk to if I have questions about usage of Menorrhagia in breastfeeding?